← more from
Bloodshot Records
Get fresh music recommendations delivered to your inbox every Friday.

by Rex Hobart & the Misery Boys 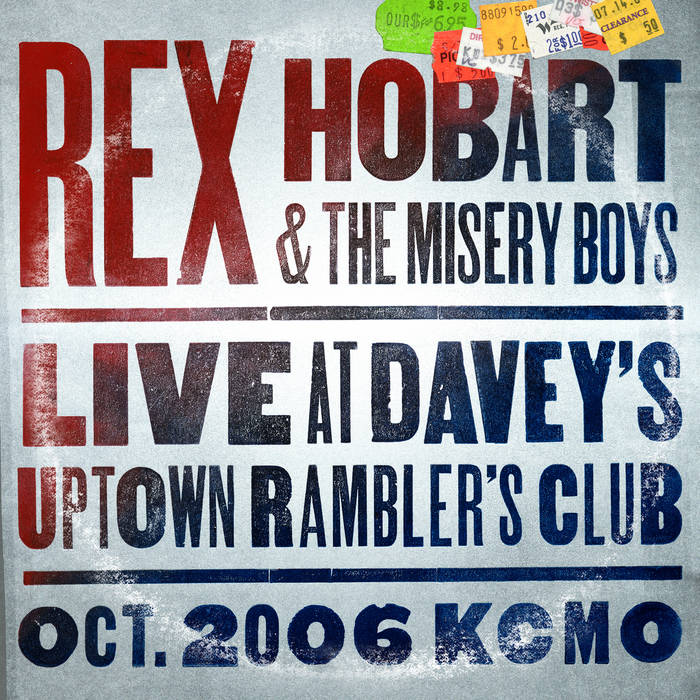 DAVEY’S UPTOWN RAMBLER’S CLUB (KCMO), REX HOBART & THE MISERY BOYS’ favorite place to play on planet Earth, was gutted by electrical fire on the morning of March 14, 2020. A 7:02am alarm. Meanwhile, the entire U.S. was locking down in COVID quarantine. And just like that, our esteemed hometown Honky Tonk - the legendary Kansas City nightclub that had taught us how to BE a band - was gone. With it, the whole pre-pandemic concept of a “gig” as any of us had ever known it.

Continuing now to slog through what has become the COVID-era, to me, it seems like a decade has passed since that most-surreal week of just five months ago when everything went to hell at once. Then again, when you’re chained to Rex Hobart & The Misery Boys from the inside, everything always seems like a decade of hell - though it may only be two hours on stage. Could it have really been 14 years ago when we evidently made an almost-forgotten live recording at Davey’s? Why, yes. Yes it was. Did I mention it was nearly Halloween?

Engineered by our beloved long-time go-to KC sound man, Chad Meise with recording help from Wesley Ronald Burrows, over the two nights of October 26th & 27th, 2006, this recording eschews the raw (ok, drunken) REXuberance that made this retro “pity party” honky-tonk band one that can only be experienced in our truest form at Davey’s Uptown Rambler’s Club.

On these two nights, we were in our element - and Halloween costumes. If that’s not enough, this recording captures our band at it’s own 10-year anniversary. Looking back, it was a moment when, honestly, each song played could have been that song’s last live performance - just as the show itself could have as easily been our last as a band. It’s THAT palpable chaos - the sense that it could, and surely would, all come crashing down any minute - that makes this document so absolutely “LIVE”. This classic performance is, at turns, heartfelt and hilarious (at least to us) and it may even be worth a listen for it’s own questionable sake. But the fact that it took place at Davey’s Uptown Rambler’s Club - OUR club - as we will physically never know it again AND well-before the current COVID pandemic rendered a raucous, intimate, nightclub gig impossible for the time being, this document is, well, down-right mystical.
Fast-forward to sometime in the months leading up to the Davey’s Fire of 2020... After the usual back and forth of trying to find a date that worked for everyone, Davey’s proprietor, Michele Markowitz, inked us for a return to her stage on the evening of July 31st 2020. No one could have imagined that, even if Davey’s was still as such, we wouldn’t have been able to gather for a show with our friends in our faces at the edge of the beer-puddled stage that evening there or anywhere. Sadly, that’s just the way it is for now. But luckily, this REX HOBART & THE MISERY BOYS LIVE AT DAVEY’S UPTOWN RAMBLER’S CLUB recording captures just way it WAS - and, we soulfully believe, will be again.

Somehow, we survived those two back-to-back Halloween nights at Davey’s. Heck, we’re STILL a band and have even made an album or two - and a puppet show - since that autumn weekend in 2006. Likewise, we have to believe we will survive the back-to-back challenges of the Davey’s Fire and this COVID-era reset. With that, please raise your cold sweaty cans! We invite you to fall back in time with us to Davey’s Uptown Rambler’s Club 2006 for a Rex Hobart & The Misery Boys show tonight! Yes, it’s a rerun, but as we pull these can tabs back in unison, let’s also imagine ourselves clawing our way into the future... A future when we’ll all be together again, shoulder to shoulder, yelling, drinking, cussing & dancing, as human beings are want to do. Listen for yourself there in the crowd... You’re heckling the band while you buy us another round of shots! This will happen again - and REX HOBART & THE MISERY BOYS LIVE AT DAVEY’S UPTOWN RAMBLER’S CLUB KCMO will always be what it’s like.

Bandcamp Daily  your guide to the world of Bandcamp